Are girls really born with a desire to dress in pink and play with dolls while boys favour blue clothing and prefer to play with cars? And if not, why have these ideas become so ingrained in many countries that they are taken for granted? Advertising clearly plays a key role in influencing the imagination. The image of a fat, jolly grandfatherly Father Christmas with a copious white beard that is ubiquitous today owes much to Haddon Hubbard "Sunny" Sundblom, who created this iconic figure for Coca-Cola in the 1930s. But is advertising causing gender stereotypes, or simply reflecting the status quo?  Could gender discrimination in early childhood be one of the first steps in the creation of inequality as underlined by Simone de Beauvoir in “The Second Sex” : “One is not born, but rather becomes, a woman"? And if so, can toy advertising help change stereotyping in childhood? This last question has been taken seriously by Swedish toy retailer TOP-TOY, which runs nearly 50 Toys"R"Us retail stores in Northern Europe. After being criticised for featuring “outdated gender roles”, the group has this year published a gender-neutral catalogue with girls shooting guns and boys playing with dolls. London toy store Hamleys took a similar initiative a year ago, when it decided to make its store “gender neutral”, using white signs instead of blue and pink ones and organising floors by theme instead of gender.

Much of what we think we know about gender preferences in childhood is clearly manmade, not innate. For many centuries there were no attributed colours to baby boys and girls, who were generally dressed identically, in white. By the end of the 19th century however, the idea that girls and boys should wear distinct colours started emerging. But at that time blue, which among other things was associated with  the Virgin Mary, was preferred for girls, while pink was considered more masculine. This was highlighted in 1918 in the Ladies’ Home Journal which stated that: "There has been a great diversity of opinion on the subject, but the generally accepted rule is pink for the boy and blue for the girl. The reason is that pink being a more decided and stronger colour is more suitable for the boy, while blue, which is more delicate and dainty, is prettier for the girl." How times have changed! 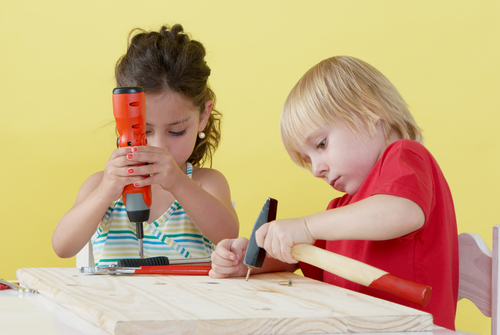 According to a study conducted by Professor Melissa Hines at Cambridge University on 120 children aged under two, there is no innate colour preference between the two sexes, with both girls and boys preferring pinker tones and rounder shapes. At the age of 12 months, 57.2% of girls and 56.4% of boys looked at the dolls first when shown different toys. By the age of 24 months old, however, while 52.7% of girls still looked at the dolls first, it was down to 47.9% of boys, who started developing a preference for the car image. The study puts this down to the impact of “socialization or cognitive gender development rather than inborn factors”.

But can playing with dolls be blamed for the over-representation of women in caregiving positions? Girls brought up in a world of pink still tend to be more ambitious than boys: when asked what they expect to be doing around the age of 30, 15-year-old girls tend to have more ambitious professional aspirations than boys. On average, they are 11 percentage points more likely than boys to expect to work in high-status careers such as legislators, senior officials, managers and professionals. Yet, when they hit the labour market, women tend to have fewer decision-making responsibilities and only represent 10% of boardroom positions in OECD countries.

So what happens between high school and the beginning of their professional careers? Women tend to experience more difficulty in entering the labour market, earn less than men and are more likely to work part-time, according to the latest OECD report on gender, “Closing the Gender Gap: Act Now” . Different initiatives are being tried out to promote greater gender equity, such as a quota imposed in Norway, where women are required by law to make up 40 per cent of board memberships. A change in mentalities is also necessary however. And this starts at home: throughout OECD countries, women are doing more of the unpaid work (cooking, cleaning, caring for children) than men.

These differences are all the more striking when you realize that when it comes to the really important things in life, men and women think alike. Better Life Indexes created by both men and women follow similar patterns, with life satisfaction, health and education coming in first as priorities!

Closing the gender gap will be a long process. After getting rid of “girl” and “boy” signposts considered discriminatory, Hamleys has gone back to using “Pink” and “Blue” to demarcate floors, because of the confusion created by the lack of information.