For many people, thinking about work brings mixed emotions. Day-to-day stresses, strains and frustrations can be off-set by office camaraderie, the satisfaction of meeting deadlines or targets, and the rewards of feeling like you’re doing a “good job”.  Crucially, of course, paid work also provides a salary – to help cover the cost of a whole range of things that are important for well-being, including better health, education, housing, and opportunities to socialise. For many economists, work is assumed to be a necessary evil: something you do to pay the bills (and until all the bills are paid), rather than something you would do because it brings you happiness and well-being, over and above your salary. New data on subjective well-being offer some insights into these complex relationships. 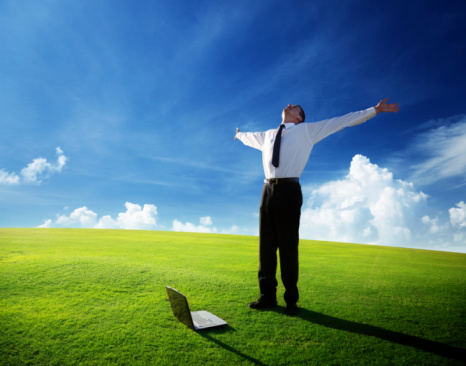 In July, the Office of National Statistics (ONS) released some data about how life satisfaction, happiness, anxiety, and the feeling that life is worthwhile varies around the UK.  Although the data are experimental statistics at this stage, they come from a nationwide sample of over 160,000 people – arguably offering a closer look at happiness than we’ve ever had before. Among this UK sample, being unemployed made a very big difference to subjective well-being overall. 80% of people with jobs rated their life satisfaction as 7 out of 10 or higher. But 45% of unemployed people rated their life satisfaction below 7.  The ONS also found thatunemployed people reported less daily happiness, more daily anxiety, and less strong feelings that life is worthwhile. This follows the same pattern that we have seen in many large international data sets, which tend to show that even after fully considering the loss of income, the unemployed have lower life satisfaction than those in paid employment.

Once you’re in a job, does it matter what you do? The ONS data offer some initial insights there, too, breaking down their data into broad job types.  Jobs with the highest levels of self-reported life satisfaction were ‘professional occupations’, and ‘managers, directors and senior officials’. These workers also reported the strongest ratings of life feeling worthwhile, along with workers in ‘caring, leisure and other service occupations’. As a group, ‘process, plant and machine operatives’ reported the lowest levels of life satisfaction, with ‘elementary occupations’ and ‘sales and customer service occupations’ also reporting comparatively lower scores.

Of course, these correlations alone don’t tell us anything about cause – and individual differences in happinesswithin say, the group of managers, are much larger than the differences between managers and caring jobs, for instance.  Subjective well-being, like job satisfaction, is driven by a very wide range of factors, some of which group together in individuals. ONS point out that higher subjective well-being seems to be found among those with jobs that offer more responsibility and control over their work, as well as higher incomes – implying it’s not just what you do, but how you (are able to) do it, and how you are rewarded for it.

Despite the obvious benefits to our overall assessment of life of not being unemployed, there is no doubt that work can have a less positive impact on how we feel day to day.  Diary studies (such as those by Kahneman and colleagues) have found that people tend to feel fewer positive emotions, and more negative ones, when they’re at work, relative to other activities. The only daily activity ‘worse’ than work itself is the commute. The times of daywhen we tend to be happiest include when socialising, relaxing, eating, and enjoying intimate relationships. Positive emotions also tend to be higher on weekends than during the week – but life satisfaction measured on different days usually remains about the same.

These findings highlight some of the important differences between feeling satisfied with life as a whole, and the day-to-day experience of happy feelings.  While annual leave and weekends off can certainly give you a positive boost, being without a job permanently is a very different story – and it seems that in most cases the longer term benefits of work can help compensate for the temporary emotional ups and downs.