Measuring well-being is about going beyond the cold numbers of GDP. But cold as it may be, GDP remains a very important indicator for measuring the economic performance of countries, which is a fundamental driver of well-being. This is not only because income means higher material standards but also because income is needed to sustain private and public spending in non-material components of well-being, such as education and health. However, there is an increasing recognition that focusing on GDP alone is not enough to achieve better lives for all.

The chart below demonstrates this by showing a country’s s GDP per capita alongside its performance on the OECD Better Life Index. The relationship is positive – in other words, countries with higher GDP per capita are also those where well-being is higher on average. However this relationship becomes weaker as a country’s income grows, suggesting that once income reaches a certain level, increased income is less likely to generate well-being. The other interesting feature of this chart is that some countries do better at delivering wellbeing as measured by the Better Life Index than they do if gauged only on the basis of economic production per capita. This is the case for all the Nordic European countries but also for New Zealand. On the other hand,  there are countries that do better in GDP per capita than on average well-being,  for instance the United States and Switzerland.

So why in these two sets of countries do economic performance and well-being  not go strictly  hand in hand? One explanation is that the countries that do better in terms of well-being have  made the choice of working less to achieve a better work and life balance. This translates into lower income but also increased leisure time that can be shared with friends and family, or that is used for volunteering and engaging with the community. Another reason is that these countries have better environmental quality, partly because of lower economic production and thus pollution. Well-being is a matter of democracy and societal choices, what really matters at the end of the day is whether countries are where their citizens would like them to be. It can be higher economic production or more time for life, longer healthy lives or more connected neighbourhoods. What is important is to collect the relevant set of statistics to judge whether collective objectives are met and ensure that governments are paying the righight degree of attention to these statistics. 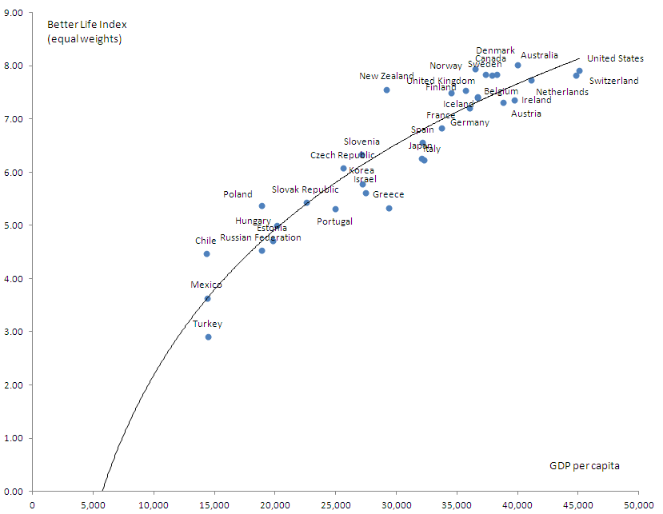