Speaking to business leaders during  the G20 summit in Mexico, the OECD Secretary-General said that Europe and the euro zone represented “the major risk for the world economy” while  the head of the World Bank noted that everyone was "waiting for Europe to tell us what it's going to do". All agree that we are in the midst of one of the most devastating crises experienced by our economies and societies since World War II. Against this backdrop, does it make sense to talk about well-being and to prompt governments to take actions to improve people’s well-being?

At the OECD, we believe that it does. Looking at people’s lives in the current context is not a distraction for policy-makers and this is why:

The current crisis is not just a financial crisis, it is also a social crisis with consequences for  all aspects of well-being. Seventeen million people are currently unemployed in the euro area, and  the situation is particularly worrying for young people, for whom the jobless rate reaches 50% in Spain and in Greece . These figures highlight the potential dramatic consequences of the crisis for individuals in terms of both objective (economic resources, income, housing conditions) and subjective well-being (self-esteem, social connections, overall life satisfaction). For instance research shows  that long-term unemployment has large negative effects on physical and mental health and on subjective well-being, suggesting that the negative effect of joblessness is not limited to an income loss. Indeed, long-term unemployment places people at risk of permanent social exclusion, poverty and deprivation. As of today, 44% of the Euro zone unemployed are long-term unemployed. 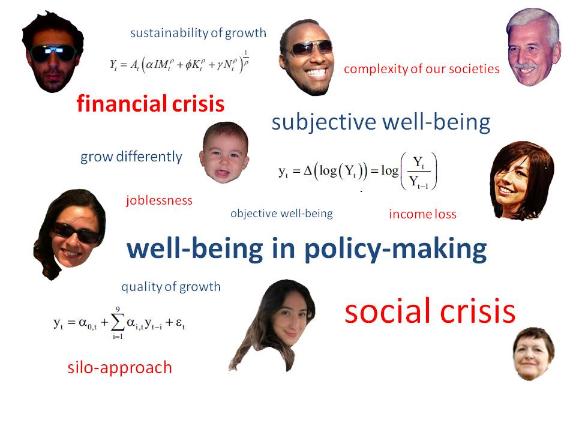 The crisis has highlighted the need for policy makers to reconsider their economic models and to adopt a more balanced approach, going beyond the unconditional pursuit of growth. There is also an increasing recognition that the world will not revert to the growth rates observed after the World War II and thus we need to grow differently this time around. Growth is crucial to get economies back on track but quality and sustainability of growth matter even more. This is why we need to develop new economic models and approaches to policy making that are centred around people’s well-being, not just economic and financial prosperity.

Embedding well-being in policy-making can greatly improve the efficiency and effectiveness of policies. For instance, while the current priority is to restore growth and public finance, policies to achieve these aims could be designed from the perspective of people’s well-being. For instance, cuts in public expenditure should be confined to those items where a reduction does not impair well-being in the long-term (e.g. expenditure in education and in research and development). The growing complexity of our societies also requires an holistic approach to policy-making that transcends the “silo-approach” often prevailing at the moment. Putting well-being at the core of policy-making can help policy makers to face complexity and take better decisions for creating better lives for their citizens.

Speech by OECD Secretary-General at the B20 summit, Los Cabos, Mexico, 2012

Official website of the G20 summit at Los Cabos, Mexico, 2012