Gallup* is a strong believer that many factors beyond income contribute to a good life. That is why the company measures dozens of behavioral economic indicators as part of its World Poll.

Gallup has now conducted more than 1 million surveys on more than 100 metrics in 160 countries and areas since 2005, revealing countless new findings about the attitudes and behaviors of the world’s 7 billion residents.

Of all of Gallup’s metrics, two metrics emerge as the most valuable for world leaders to track and target. Gallup’s research clearly reveals that a country’s Payroll to Population employment rate and thriving rate strongly relate to GDP per capita and to each other. This means that higher GDP nations tend to have greater percentages of employed people with a full-time job of at least 30 hours a week and greater percentages of people who rate their lives well enough to be considered thriving. 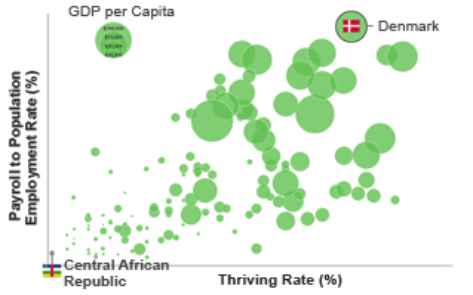 The extremes in all aspects of life that stem from differences in thriving, Payroll to Population employment, and GDP are apparent in comparing the World Poll data for Denmark — a country that performs among the best in the world on all three metrics — with the Central African Republic — one of the poorest performers  in the world.

For any society to succeed and grow, its citizens must have a basic sense of security. For many residents in Central African Republic (CAR), a country that has suffered decades of instability and violence, this essential foundation is absent. Another base-level component of societal wellbeing is residents’ ability to afford food and shelter for themselves and their families. In CAR, where jobs are essentially nonexistent, more than eight in 10 residents said there have been times in the past year when they did not have enough money to buy food.

The infrastructure needed to allow residents to be healthy, educated, and move about the country is not present in CAR. Few in CAR are satisfied with public transportation, roads, water quality, the availability of quality healthcare, and the schools in their communities. Additionally, in CAR, there is limited access to the communication conveniences most people in the developed world take for granted. Only one percent of Central Africans have Internet access in their homes and few have a television (8%) or cellular phone (20%). Many Central Africans also perceive lack of media freedom and widespread corruption as issues in their country.

Those living in CAR are also far less likely than those in many other nations  to have positive daily emotional experiences, and social support is lacking — only 39% there said they have someone they can count on to help them if they needed it.

Life is good for most Danes. Residents there have all the basics met: most feel secure and few report problems buying the food and shelter they and their families need.

Infrastructure in Denmark is robust, efficient, and effective, according to its residents. The majority of people are satisfied with public transportation, roads, water quality, the availability of quality healthcare, and the schools in their communities. Nearly all Danes have access to key communication devices: televisions, the Internet, and cellphones. Most people in Denmark say their media have enough freedom, and few say there is widespread corruption in business or the government.

Along with Denmark’s Payroll to Population employment rate, its residents’ views of the job climate and their entrepreneurial spirit also provide a strong indicator of economic energy. Nine in 10 Danes are satisfied with their living standards and more than seven in 10 see their local economy as good.

With societal basics in place and good jobs available, a country’s wellbeing will soar. Danes report experiencing a lot of positive emotions and few negative emotions, contributing to the country’s high thriving rate.

To see how other countries rank on these crucial metrics and to learn why strength on just one of these metrics is not enough, view this infographic.

About the authors: Lymari Morales is Gallup’s Editorial Director. Elizabeth Mendes is the Deputy Managing Editor.

About the Gallup-World poll: Gallup conducts surveys in 160 countries and is committed to doing so for the entire century. The Gallup World Poll provides a scientific window into the thoughts and behaviors of 98% of the world's residents through nationally representative samples. It is the only global study of its kind in existence.